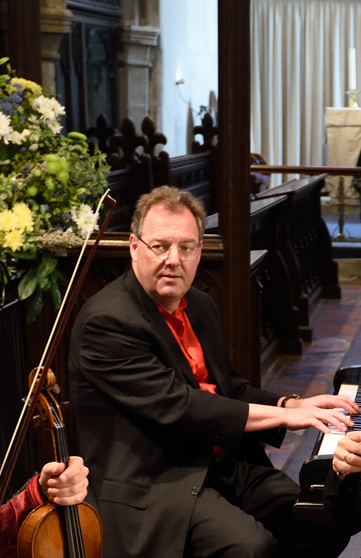 John performs regularly in the major festivals across Europe, broadcasts for radio, and has issued a string of critically acclaimed recordings.  His recording of Lyapunov’s Piano Sextet with the Dante Quartet for Dutton Digital was a BBC Music Magazine ‘Recording of the Month’, as was a Double CD of British Twentieth Century Cello Sonatas with Alexander Baillie for SOMM.
Concerto appearances include Grieg at St John’s Smith Square and Tchaikovsky at the Royal College of Music. Whilst Head of Keyboard at Christ’s Hospital, he programmed the complete Chamber Music of Brahms, taking the 17 piano parts – an abiding passion increasingly informed by historic performance study. Baillie/Thwaites have recorded the Brahms Cello Sonatas using period pianos in Vienna.

John’s more recent teaching career includes posts at the Royal  Conservatoire of Scotland and the Guildhall School of Music and Drama. He is Course Director of the Cadenza International Summer Music School, a piano and strings festival resident at the Purcell School, and Head of Keyboard Studies at Birmingham Conservatoire, where he has directed major Festivals of Ireland, Delius, Bax, Skryabin and Brahms as well as directing a celebrity-studded All Night Gala at Birmingham Town Hall.

These are passionate, focused, full-blooded readings. Alexander Baillie and John Thwaites invest each work with the power of utter belief, and as a result these are probably the best current versions of the Bridge, Ireland, Rubbra and Delius Sonatas.